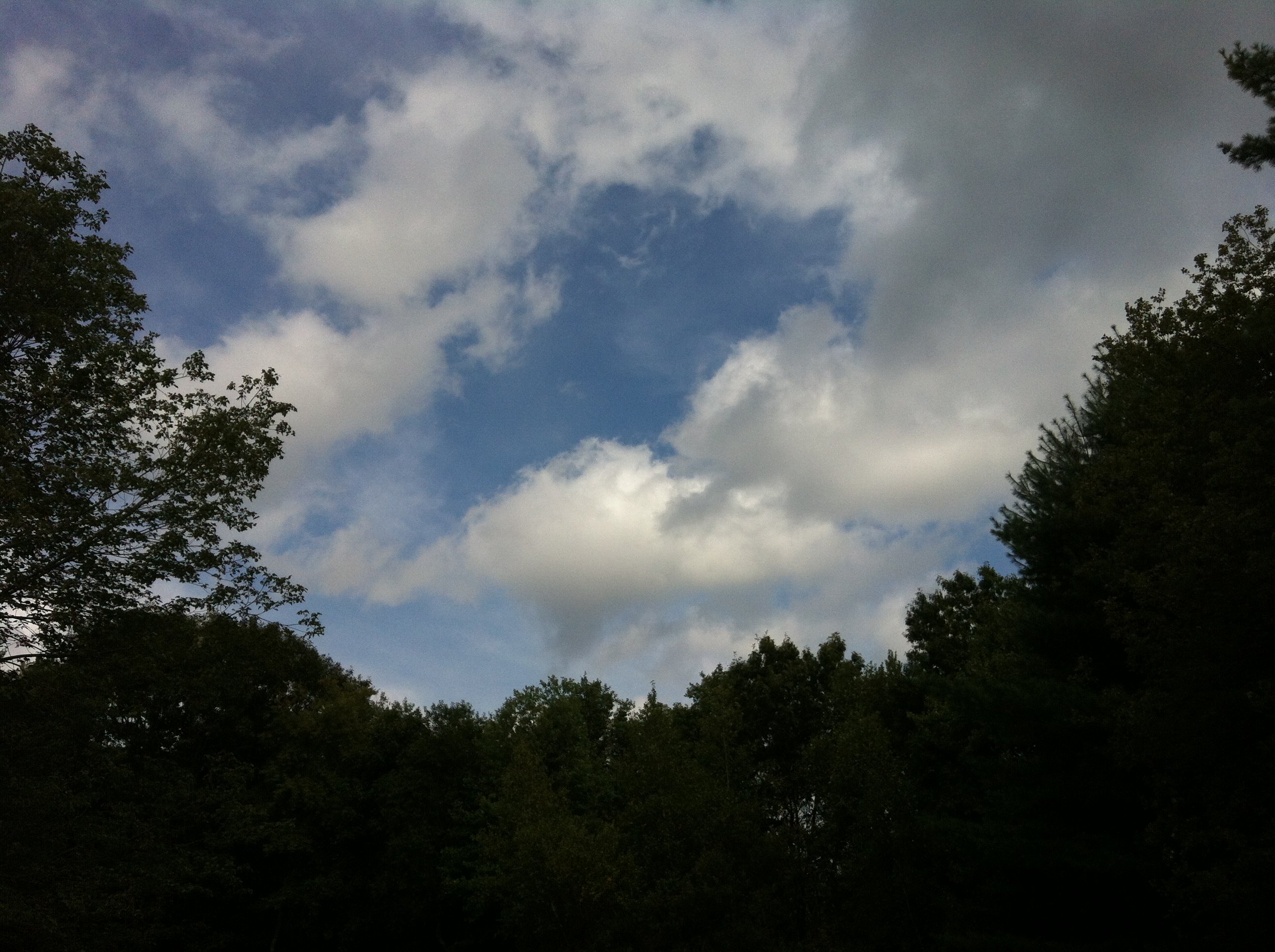 That photo is part of the tree line I view from my back porch. I’m enjoying some time off right now, but today’s legal news warrants a bit of thought and comment.

Generally, I don’t write much about political subject matter at this blog, or in the periodicals or websites I write for. Yet the religious liberty issues and the marriage issues that are currently being debated in our nation have a lot of meaning for Catholics. The debate in which we find ourselves touches the spiritual core of our identity as Christians.

Among Catholics, there is a deep divide over this issue of marriage. I say we are divided because there is such disagreement between Catholics who hold what the Church teaches about marriage and freedom as true and unchanging, and the Catholics that see those ideas are archaic or no longer binding, or in need of updating. If you’ve been a reader of mine for a while, you know I stand with the Church on this issue. But I also know that the law of love demands that we love those who disagree with this teaching. So I’m not in any position to malign or discredit the persons who disagree.

In truth, the Catholic Church sees marriage not only as a function of natural law, but also as a sacramental one and divine one, instituted by God, the kind that no person should put asunder. (Mt 19:6, Mk 10:9) For me this means that marriage is a very specific and permanent joining of man and woman, and nobody, and no law ought to separate them. Following that, it stands to reason that no law ought to separate, or put asunder, the meaning of marriage from its origins.

So I’m writing this post as a reminder that we all have to pay attention to what’s going on,  for we all are part of the discourse in this nation, and in our families, for the sake of the common good. As a Catholic, recognizing the dignity of the human person and their ultimate good, and the good of the many is very precious to us. When human laws disregard human flourishing and human rights, or are contrary to God’s law of love, we must speak up.

Not only that, simultaneously, we must find better ways, as a Church, to witness to the law of love for the sake of our brothers and sisters, relatives and friends, who are lobbying for a same-sex marriage recognition. The Church’s stand on moral codes has always been a hard road to travel. There’s a reason Jesus preached about a “narrow” way. (Mt 7: 13-14, Lk 13:24.) We must find ways to stand for marriage without rejecting others who disagree with our positions. I believe Jesus’ advice about loving our enemies was more about how to fight the good fight without degrading or disrespecting the other person in the process. Let it be that whenever we are asked to give an account of what we believe, we may do so as happy warriors, as those who offer respectful dialogue and ultimately praise to God in the process.

There are many who will write about this Supreme Court ruling much better than I. And when I was looking for a title for this post, I almost wrote the same one as I now see Kathy Schiffer wrote over at Patheos.

Besides praying about all this, I do read, and I do discuss these things with my friends and family. I hope you are too. I hope you are  a conscientious voter in the state where you live. So, rather than me blab on about this, let me share with you a few resources to read in the midst of what is sure to be a media firestorm on the subject of today’s ruling.

I’ve been reading Ryan T. Anderson. He’s smart and he knows the law… The law, not the spin. The law is precise. The spin not so much. The spin that some same-sex marriage proponents want the rest of the world to believe is that same sex marriage is the law of the land. It is not. It is the state’s right to make its own policies regarding marriage laws.

From Ryan T. Anderson, at Heritage.org…

In its ruling on California’s Proposition 8, the Court declared that the citizen group that sponsored Prop 8 did not have standing to defend the constitutional amendment that millions of Californians voted to pass. The only reason this jurisdictional question was an issue is because the governor and attorney general of the state of California decided to not defend a law passed by the people of that state.

It is scandalous that the governor and attorney general refused to perform their duty. That abdication of their constitutional responsibility should not have prevented these laws from having a vigorous defense in court. This sets a disturbing precedent and distorts the balance of powers between the legislative, executive, and judicial branches of government. It would allow the executive branch to effectively veto any duly enacted law simply by refusing to defend it against a constitutional challenge.

While the government of California through its inaction has tried to silence the voices of Californians, the Court has not created a right to the redefinition of marriage. Marriage laws in the states that tell the truth about marriage—that it is a union of one man and one woman to provide children with a mom and a dad—have not been struck down.

And we must now work to protect marriage laws in the 37 other states defining marriage as a man and a woman across the country.

Read the rest of this article.

On the Defense of Marriage Act (DOMA), Anderson continues…

In its ruling on the federal Defense of Marriage Act (DOMA), the Court struck down Section 3, declaring that the federal government cannot define marriage for its own federal policies and federal laws but must accept whatever the states decide about marriage. The Court’s ruling, however, does not affect Section 2, which provides that no state is required to give effect to another state’s recognition of same-sex marriages.

Here, the Court got it wrong. The Court ignored the votes of a large bipartisan majority of Members of Congress. It is absurd for the Court to suggest that Congress does not have the power to define the meaning of words in statutes that Congress itself has enacted. Just as the states have constitutional authority to make state policy about marriage, so too Congress has constitutional authority to pass a federal statute defining a term for federal programs created by federal law.

Again, read the rest of this.

The folks over at CatholicVote. org are not waving any white flags either. Brian Burch, the President of CV had this to say today on both DOMA and Prop 8:

It is also important to remember that DOMA protects states from being forced to recognize same-sex marriage in other states.  That portion of the law was not challenged and remains in force.

The Court disenfranchised millions of voters today with its decision on Proposition 8.  An activist majority effectively overturned the votes of millions of citizens who twice voted to protect marriage.  Nevertheless, the record in California is now plain: the people voted to protect marriage, but reckless  politicians refused to respect the right of the people and enforce the law.  What is left is a single decision by a district court judge that applies to two couples.  The legal fight to clarify what happens next will be critical and will be heavily contested by defenders of marriage in the courts.  Same-sex marriage  advocates touting immediate statewide gay marriage in   California are misleading the public.

Today’s decisions, while disappointing, should embolden proponents of traditional marriage to fight on with even more vigor while we can.  Same-sex marriage advocates did not get what they wanted, namely a “Roe v. Wade” for marriage. The future of marriage remains a dispute open to ‘We the People.’ The debate on marriage lives on.

This means the dialogue continues, and the states must take the lead in these discussions.

Our Catholic Bishops are adding their own outcries. This is from the USCCB’s press release today:

Today is a tragic day for marriage and our nation. The Supreme Court has dealt a profound injustice to the American people by striking down in part the federal Defense of Marriage Act. The Court got it wrong. The federal government ought to respect the truth that marriage is the union of one man and one woman, even where states fail to do so. The preservation of liberty and justice requires that all laws, federal and state, respect the truth, including the truth about marriage. It is also unfortunate that the Court did not take the opportunity to uphold California’s Proposition 8 but instead decided not to rule on the matter. The common good of all, especially our children, depends upon a society that strives to uphold the truth of marriage. Now is the time to redouble our efforts in witness to this truth. These decisions are part of a public debate of great consequence. The future of marriage and the well-being of our society hang in the balance.

Marriage is the only institution that brings together a man and a woman for life, providing any child who comes from their union with the secure foundation of a mother and a father.

Our culture has taken for granted for far too long what human nature, experience, common sense, and God’s wise design all confirm: the difference between a man and a woman matters, and the difference between a mom and a dad matters. While the culture has failed in many ways to be marriage-strengthening, this is no reason to give up. Now is the time to strengthen marriage, not redefine it.

There’s a lot of  room for Catholics to share their wisdom in these state forums that will continue. I hope you will add yours. And while we’re at it, let’s remember to pray for one another. note: comments have been disabled because I’m not at my desk to moderate them.