Here’s my tribute to what I will miss about Pope Benedict XVI, and what I’ve learned from him 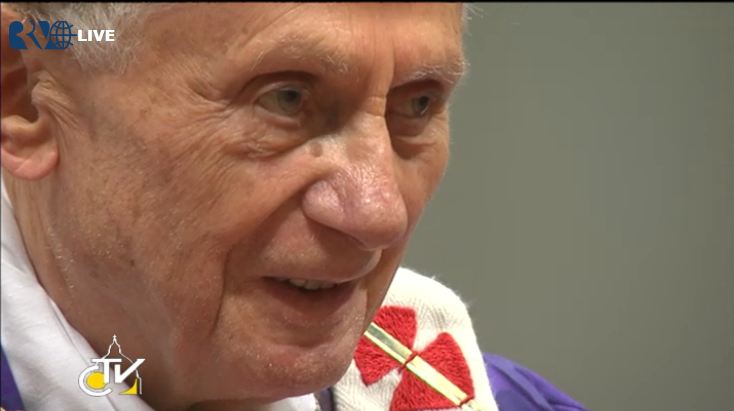 From my column at Patheos this week on the intersection of Benedict, the Catechism, and the hope of heaven…

I have a first edition English translation of the Catechism of the Catholic Church in hardcover. Ever since my great awakening to my Catholic faith in my teen years, I’ve been reading about our faith, and taking theology classes when I could. So in 1992, when I heard that the Catholic Church was putting out a new catechism, the theology geek in me bought a copy when the English translation arrived in 1994.

Within the first 70 pages or so, I was hooked. I had no idea who was responsible for what I was reading, but the clarity of the teaching grabbed me.

There were several “teachable moments” where the Catechism affirmed what I already believed, or corrected or challenged my understandings. I’ll share just one instance that blessed me, and came back to bless me again years later, and is blessing me still.

The ultimate end of the whole divine economy is the entry of God’s creatures into the perfect unity of the Blessed Trinity. (CCC, par 260)

Everything in God’s plan of salvation — another name for the “divine economy” — is moving toward God. Myself included. The Trinity is my destiny and yours.

This woke me up as it gave me pause.

This one sentence kept coming alive in my mind over and over again. It expanded my image of God, my relationship with him and his heaven. For most of my adult life I vaguely acknowledged that, one day, I would die. Yet I never really considered the true hope of heaven, or what it might look like. I was merrily oblivious. Looking back, my rather lame vision of heaven included clouds and angels and what not. God’s heaven was a very distant “place” that didn’t demand my meditation. But I began to ask myself, how can one truly have hope without knowing where the source of hope comes from?

Good catechesis, and the power of the Holy Spirit, has a way of making us dig deeper until we own what we profess to believe.

Two years later, in 1996, I was diagnosed with breast cancer and the weight of my own mortality squarely rested across my shoulders. During that time of stress and heartache, what the Catechism had taught me came alive. I remembered that line about entering into the unity of the Trinity. My life, lived well — yoked to Christ — would someday have this potential to be permanently joined to God… to be in union with the Persons of the Trinity for eternity.

Heaven would be all about this relationship!

That one little sentence of truth from the Catechism brought me such hope, and clear direction for the rest of my life! And hope is exactly what one needs, not only when facing a cancer diagnosis, but, really, every single day.

Fast forward, years later, into cancer survivorship…  the same Catechism was still challenging me, and it was a catalyst for my returning to graduate school in my forties. There were thousands of footnotes in the Catechism, and I wanted to know what they all meant! (That thirst eventually led me to seek a Masters in the theology, and I received my diploma in 2008 –- 12 years post-cancer!)

As I poured over Scripture and theology books during those study years, I came to discover the “who’s who” behind the Catechism.  Joseph Cardinal Ratzinger – our Pope Benedict XVI  – was the chief architect of the Catechism, at the directive of Blessed Pope John Paul II.

In 1986, I entrusted a commission of twelve Cardinals and Bishops, chaired by Cardinal Joseph Ratzinger, with the task of preparing a draft of the catechism….

I felt such a debt of gratitude to Cardinal Ratzinger for the Catechism. It was a monumental work – the first update to the Roman Catechism in over 400 years – plus it took six years to develop, with input from over a thousand bishops from the world over. It would influence future generations for the next century! It certainly had its effect on me.

What’s more, my studies led me to discover Ratzinger as one of the premier theologians of the last two generations — with dozens of books to his name! As I studied eschatology — the study of death and eternal life — I learned how important the actual Risen Body of Jesus is to humanity’s eternal destiny. I came to relish Fr. Ratzinger’s work on the subject. The good professor helped me unpack the beauty of a heavenly union with the Trinity, as he describes how Jesus brings about this union for us.

Heaven’s existence depends on the fact that Jesus Christ, as God, is man, and makes space for human existence in the existence of God himself. One is in heaven when, and to the degree, that one is in Christ. It is by being with Christ that we find the true location of our existence as human beings in God. Heaven is thus, primarily, a personal reality…

Jesus makes a space for us in himself, as we truly become the body of Christ. As I read this text that had preceded the Catechism, I immediately recognized the themes I had read earlier.

Read the rest over at Patheos.

3 comments on “Here’s my tribute to what I will miss about Pope Benedict XVI, and what I’ve learned from him”