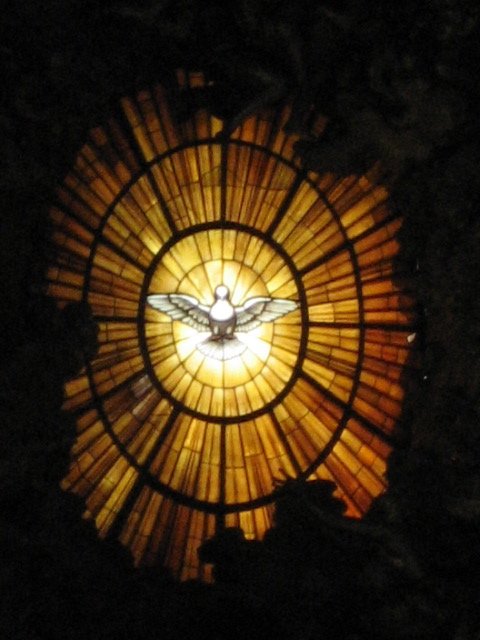 There’s a timely reminder in the Catechism of the Catholic Church for this “time” in the liturgical calendar – smack dab between Pentecost and Ordinary Time. And it is this: Pentecost should remind us of our Confirmation!

It is evident from its celebration that the effect of the sacrament of Confirmation is the special outpouring of the Holy Spirit as once granted to the apostles on the day of Pentecost.

I grew up in a Catholic home and went to a parochial grade school. It was taken for granted that I would be confirmed. But, despite its importance, Confirmation being a sacrament and all, I was slow to understand its significance in my life. Hindsight, so the saying goes, is 20/20.

If I am perfectly honest, as I look back on my Confirmation at the age of 12, I can say that that I was formed in one thing: being able to stand up for the faith. Not that I completely knew what my faith taught, mind you, but I knew I was responsible to stand up for it. I didn’t question it. I was immature, and I likened my ideas about Confirmation to a kind of “patriotism”… I was a Catholic and it was my honor to live by and defend the laws of the Church, just like I was an American pledging allegiance to the flag.

Actually, my feelings about the sacrament were almost irrelevant. Yet, despite how I would “feel” about my Confirmation, the “effects” of the Sacrament are still the same… the Holy Spirit was poured out upon me. The Sacrament “took” as long as I was properly prepared for it, and the Bishop acted appropriately as to the Rite.

I just did not appreciate my Confirmation until later.

Two years following my Confirmation, the Lord led me to a youth prayer group. Actually, the Lord led my mother to lead me to a prayer group. It seems they needed a musician to help lead the worship, and I had just enough guitar ego in me to oblige. But despite my less-than-noble reasons for serving, that prayer group was where I really started to “live it” – meaning that my faith became “not for Sundays only.”
As I look back, I began a wonderful journey of faith in my teen years, thanks to the grace of God. The grace of Confirmation began to kick in. Little did I know that I was beginning to cooperate with that grace.

CCC 1303 states that our Confirmation brings about five effects, the first of which is that the outpouring of the Holy Spirit increases and deepens our baptismal grace. Confirmation “roots us more deeply in the divine filiation which makes us cry, “Abba! Father!””
When I was a teenager, I began to understand my identity as a baptized Catholic was that of a child of God. That’s what divine filiation is—to be made part of God’s family.

For all who are led by the Spirit of God are sons of God. For you did not receive the spirit of slavery to fall back into fear, but you have received the spirit of sonship. When we cry, “Abba! Father!” it is the Spirit himself bearing witness with our spirit that we are children of God, and if children, then heirs, heirs of God and fellow heirs with Christ, provided we suffer with him in order that we may also be glorified with him.

Secondly, it follows that CCC 1303 states that Confirmation “unites us more firmly to Christ.” To my tender teenage heart, this was the idea of falling in love with Christ. As if I could really make a return to Christ for all he had done for me. But, truly, that unity with Christ was and is far more dependent on Christ’s gift to me, than my gift to him. And yet, he loves me all the same!

God is determined to give mere mortals the means to live for him. Therefore, we see the third effect of Confirmation being that it “increases the gifts of the Holy Spirit in us.” The more open we are to the Holy Spirit, the more we can respond to Christ. In other words, our moral life is sustained by the Holy Spirit’s gifts that make us docile and teachable and obedient to God’s will. (Cf. CCC 1830.)

CCC 1303 teaches that Confirmation delivers a fourth effect: it “renders our bond with the Church more perfect”. The Bishop, who administers the Rite of Confirmation, shows us that bond. Where the Bishop is, there the Church is, to paraphrase St. Ignatius of Antioch in the second century. His holy office is our apostolic witness, our tie to the foundations of our faith dating back past Ignatius to the time of Christ and his apostles. As Jesus sent his apostles, so he sends us… and we are to be sent in unity with the Body of Christ, which is the Church.

Not only that, CCC 1303 continues, Confirmation gives us “a special strength of the Holy Spirit to spread and defend the faith by word and action as true witnesses of Christ, to confess the name of Christ boldly, and never to be ashamed of the Cross. This is the Truth that we are called to stand up for and defend, and we already have been given the grace to do it. This is the special charism of Confirmation.

And what is it that we have truly received? In CCC 1303, St. Ambrose, a Doctor of the Church from the fourth century, spells out the fifth and most challenging effect of our Confirmation:

Guard what you have received. God the Father has marked you with his sign; Christ the Lord has confirmed you and has placed his pledge, the Spirit, in your hearts.

As confirmed Catholics, there is no shirking of the duties and responsibilities inherent in this calling. There may be ignoring of it, and, even a rejecting of it. But we cannot remove this Confirmation that is upon us, once it is imposed.

Like Baptism which it completes, Confirmation is given only once, for it too imprints on the soul an indelible spiritual mark, the “character,” which is the sign that Jesus Christ has marked a Christian with the seal of his Spirit by clothing him with power from on high so that he may be his witness.

Did that last line sound familiar? These were some of the parting words of Jesus to his disciples, just prior to his Ascension into heaven.

You are witnesses of these things. And behold, I send the promise of my Father upon you; but stay in the city, until you are clothed with power from on high.

And you remember what that Power was now, don’t you? The Holy Spirit at Pentecost!

2 comments on “Post Pentecost – Recalling the Effects of Confirmation”