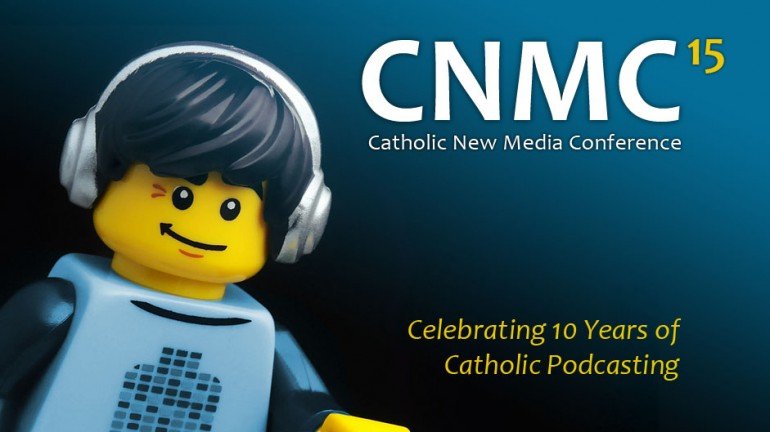 2014 brings a decision from SQPN to take a year off from hosting the conference and look toward 2015.

The next Catholic New Media Conference will be held in the spring of 2015, ten years after Catholic podcasting took off around the events of the death of Saint John Paul II and the election of Pope Benedict XVI.

Since the first CNMC in 2008 in Atlanta, the Catholic New Media Conference has brought together Catholic communicators from all over the world to share experiences and exchange knowledge and insights on evangelization, catechesis and information using new media like blogging, podcasting and internet video.

With the rise of social networks like Facebook, Twitter, LinkedIn and Pinterest, more and more people, parishes and religious organizations have discovered the possibilities of these new forms of communication. Podcasting technology, which enables people to listen to audio recordings on their computer or mobile devices and cellphones, has given many Catholics a voice and an opportunity to share their message with the world.

The next CNMC will pay special attention to the 10 year jubilee of this particular form of new media and explore the future possibilities of this medium for the church.

The CNMC is organized by the Catholic organization SQPN, the Star Quest Production Network.

If you or your church are looking to learn about digital media, or find ways to use it better while you wait for the 2015 CNMC, check out the Catholic Media Conference happening later this month, June 18-20 in Charlotte, NC, or see the Digital Church conference events for an event in your area.

As you may know, my podcast Among Women is an affiliate of SQPN. Thanks to the inspiration I received from their first 2008 Catholic New Media Conference and my longtime mega-media friend, Lisa Hendey, the podcast is five years young.

I’ve enjoyed working with the SQPN team over the years to help organize and work behind the scenes at the CNMC in 2010, 2011, and 2012. I had the privilege of speaking at their conference in Kansas City. A calendar conflict prevented me from attending in 2013, short of finding a few good friends in Boston after the fact.

We’ll see what 2015 brings! Pray for the new evangelization, and when you do, pray for the Holy Spirit to guide the church and these various media apostolates.

Prayer for the New Evangelization

Lord Jesus Christ,
You have given your Church
the mission to proclaim the Gospel to all the nations.
May our efforts to fulfill this mission be guided by the Holy Spirit
so that we might be a leaven of new life,
salt of the earth and a light of the world,
worthy missionaries and faithful to You.
Make us valiant witnesses to the Faith of the Church
and inspire us to speak the truth with love.
Help us to communicate to others the joy that we have received.
Permit us to be united, but not closed.
humble, but not fearful
simple, but not naïve
thoughtful, but not overbearing
contemporary, but not superficial
respectful of others, but boldly Your disciples.
May we bear into the world the hope of God, which is Christ the Lord,
who rose from the dead and lives and reigns with Father and the Holy Spirit,
one God forever and ever. ­Amen.
Holy Mary, Mother of God, Pray for us!
St. Joseph, Patron of the Universal Church, Pray for us!
St. Peter and St. Paul, Pray for us!
St. Thérèse, Patroness of Missionaries, Pray for us!
St Thomas Aquinas, Pray for us!